ASME B16.36-2015 standard covers pressure-temperature ratings,materials,dimensions, tolerances, testing, and making of flanges (similar to those covered in ASME B16.5) that have orifice pressure differential connections. Coverage is limited to the following: 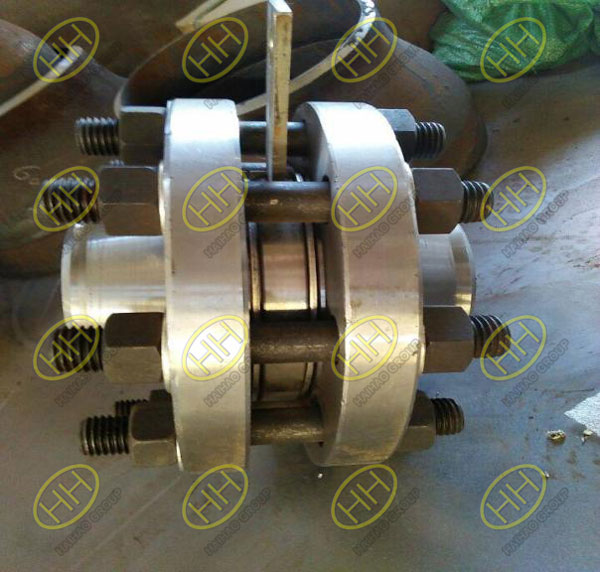 This standard covers pressure-temperature ratings,materials,dimensions,tolerances,testing,and making of flanges (similar to those covered in ASME B16.5) that have orifice pressure differential connections. Coverage is limited to the following:

Codes, standards, and specifications containing provisions to the extent referenced herein constitute requirements of this Standard. These reference documents are listed in Mandatory Appendix III.

Nonmandatory requirements relating to the product manufacturer’s Quality System Program are described in Nonmandatory Appendix A.

This Standard states values in both SI(Metric) and U.S. Customary units. As an exception, diameter of bolts and flange bolt holes are expressed in inch units only. These systems of units are to be regarded separately as standard. Within the text, the U.S. Customary units are shown in parentheses or in separate tables. The values stated in each system are not exact equivalents; therefore, it is required that each system of units be used independently of the other. Except for diameter of bolts and flange bolt holes, combining values from the two systems constitutes nonconformance with the standard. Except for Class 400 the values in U.S. Customary units are in Mandatory Appendix I. The main text of this Standard does not contain requirements for Class 400 welding neck flange; however, Mandatory Appendix II does contain requirements for this class, expressed in U.S. Customary units only.

For determining conformance with this Standard, the convention for fixing significant digits where limits(maximum and minimum values) are specified, shall be as defined in ASTM E 29. This requires that an observed or calculated value be rounded off to the nearest unit in the last right-hand digit used for expressing the limit. Decimal values and tolerances do not imply a particular method of measurements.

2.5.2 Sizes. NPS, followed by a dimensionless number, is the designation for the nominal flange size. NPS is related to the reference nominal diameter, DN, used in international standards. The relationship is, typically, as follows:

Criteria for selection of materials suitable for the particular fluid service are not within the scope of this Standard.

The pressure-temperature ratings,including all use recommendations and limitations,and the method of rating given in ASME B16.5 apply to these flanges.

(b)For materials manufactured to editions of the material specification other than those listed in Mandatory Appendix Ⅲ of ASME B16.5,refer to para.4.3.

Bolting material recommendations are given in ASME B16.5.For materials manufactured to editions of the material specification other than those listed in Mandatory Appendix Ⅲ of ASME B16.5,refer to para.4.3.

4.3 Materials Manufactured to Other Editions

Materials may meet the requirements of material specification editions other than those listed in Mandatory Appendix Ⅲ of ASME B16.5,provided

(b) the flange manufacturer certifies that the requirements of the edition of the specification listed in Mandatory Appendix Ⅲ of ASME B16.5 have been met.

Pressure-retaining plugs shall conform to ASME B16.11, unless otherwise agreed between purchaser and manufacturer. Plug material shall be at least as corrosion resistant as the corresponding flange material.

Orifice flange sizes are indicated by the nominal pipe size to which they are attached.Only those listed in Tables 1 through 5,Tables I-1 through I-5,and Mandatory Appendix II are considered standard.

The finish of contact faces shall conform to the requirements of ASME B16.5.

When the location of the pressure tap with respect to the orifice plate is critical to the service and metering conditions,its location may be altered to accommodate other than 1.5 mm (0.06 in.) thick gaskets or ring-type joint gaskets whose thickness may vary from that listed in in Tables 2 through 5 or those listed in Tables I-2 through I-5 or Mandatory Appendix II.

The alteration of location may also be accomplished by the removal of 2 mm (0.06 in.) from the raised face of the flange.If an original 2 mm (0.06 in.) high raised face is removed,the user is cautioned to limit the outside diameter of the gasket or orifice plate to the tabulated R dimension.

For ring joint flanges listed in Tables 2 through 5, Tables I-1 through I-5, and Mandatory Appendix II where radial taps will interfere with the ring groove,angular meter taps,as illustrated in Fig. 2,will be required.Each pressure tap hole shall be equipped with a pipe plug.

9.2.2 Identification. For ring joint flanges requiring alteration of pressure tap location due to interference with the ring groove other than methods provided in this Standard,such alteration shall be identified per agreement between purchaser and manufacturer.

Each flange shall have a machine bolt mounted in a hole drilled on the flange bolt circle centerline at 90 deg from the pressure taps,for use as a jack screw.The machine bolt shall be regular with one heavy hex nut. See Fig. 3.

A slot shall be provided in the flange 2 mm (0.06 in.) wider than the width across flats of the nut. The depth of the slot shall admit the nut so that there is no interference with the joining of the flanges when bolted together without orifice plate.

As an alternative to para. 10.2, a tapped hole may be provided and the hex nut omitted when agreed on between the purchaser and the manufacturer.

Threaded flanges shall have an American National Standard taper pipe thread conforming to ASME B1.20.1.

(a) The thread shall be concentric with the axis of the flange. Variations in alignment shall not exceed 5 mm/M (0.06 in./ft).

(b) The flanges are made with counterbores at the back of the flange and the threads shall be chamfered to the diameter of the counterbore at an angle of approximately 45 deg with the axis of the thread to afford easy entrance in making a joint. The counterbore and chamfer shall be concentric with the thread.

(e) The maximum allowable thread variation is one turn large or small from the gaging notch.

Tolerances on all dimensions shall be as shown in ASME B16.5 except for those shown below. 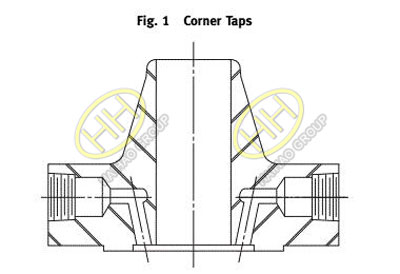 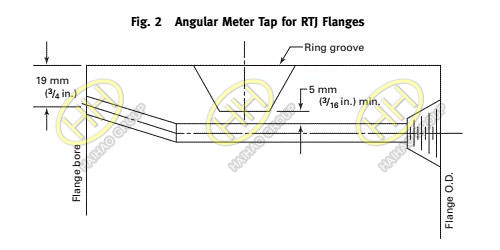 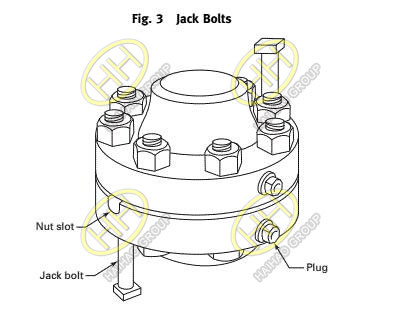